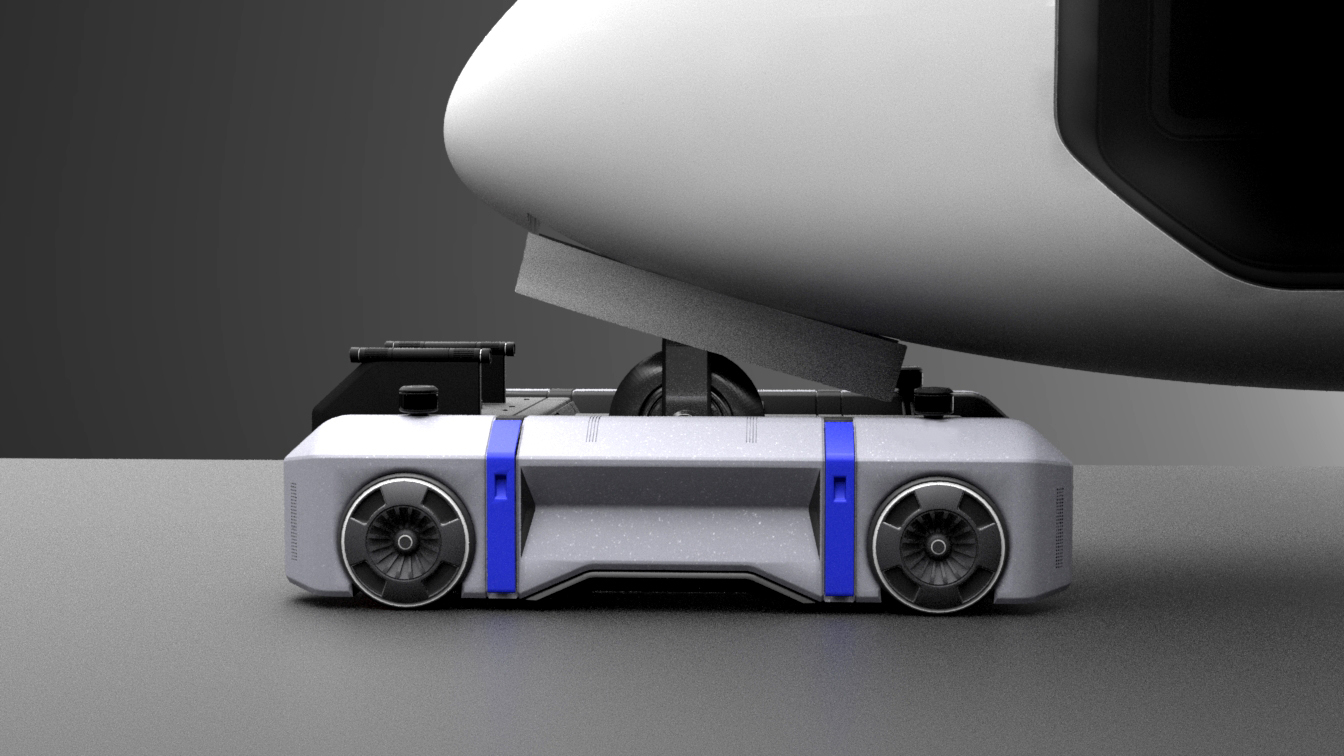 They feature a novel and patented mechanism that leverages the weight of the aircraft's front nose gear to generate the necessary torque for tugging operations. Credit: Moonware. 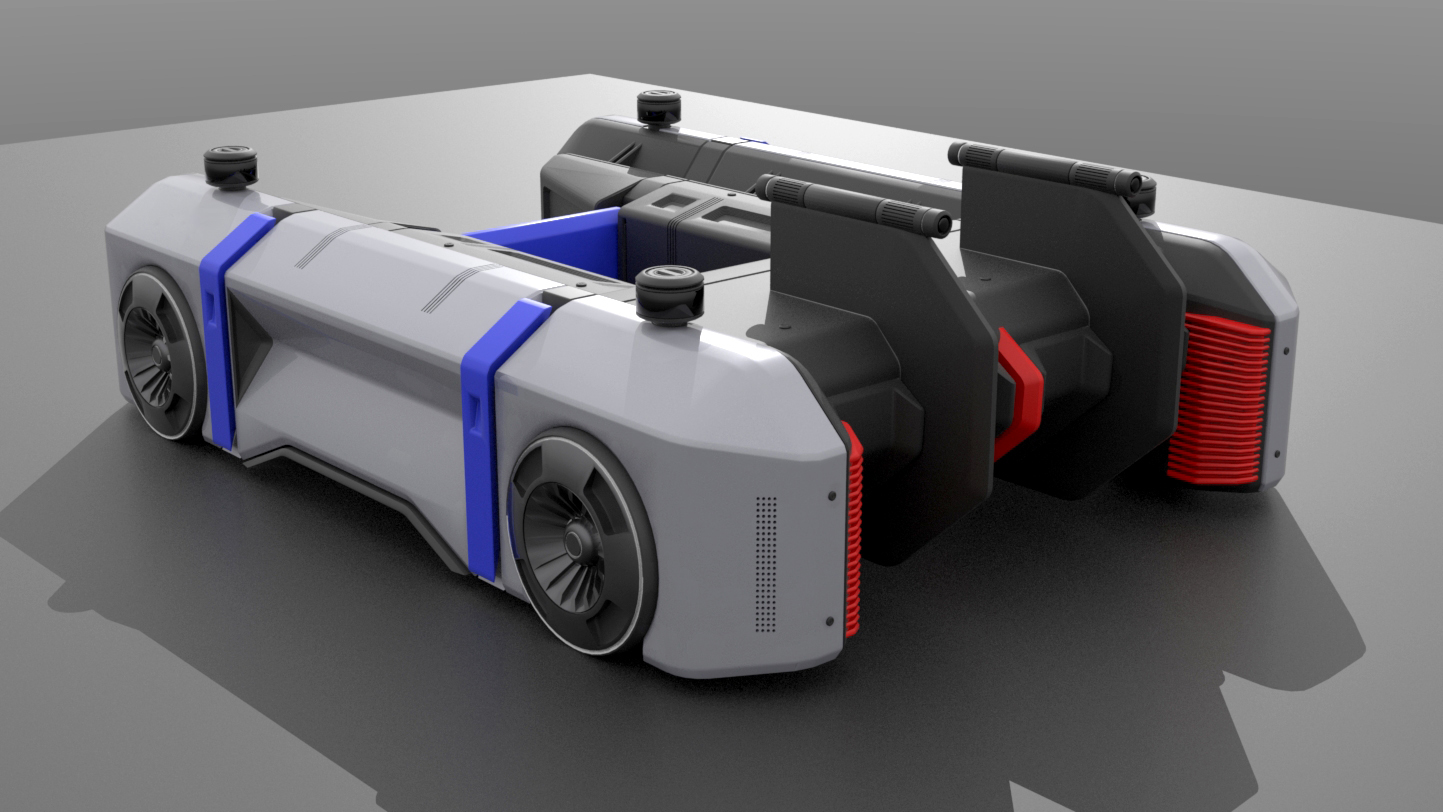 Moonware says that its autonomous vehicle platform can help reduce delays and congestions, which enables a greater throughput and can potentially ease the workload of ramp operators. Credit: Moonware.

Moonware has announced its launch as an independent company to provide software as a ground handling service and help automate airports and, in future, Skyports for Urban Air Mobility operations.

The San Francisco-based company completed a successful year-long collaboration with Uber Elevate, and designs, develops and operates autonomous and electric vehicles to move aircraft around airfields.

They feature a novel and patented mechanism that leverages the weight of the aircraft’s front nose gear to generate the necessary torque for tugging operations. This also allows them to accommodate different landing gear configurations and minimises landing gear structural fatigue, when compared to other clamping or pin-latch mechanisms.

To get more insight into Moonware’s work and its objectives in the Urban Air Mobility market, we spoke to CEO Javier Vidal and CTO Saunon Malekshahi, who are also the company’s founders.

Q: I’ve seen the video of your autonomous vehicle platform and it looks really cool. Can you tell me a bit more about this please?

Javier Vidal: “Thank you! The inception of the company started as a collaboration with Uber Elevate, which foresees that most eVTOL aircraft in their network won’t be able to taxi or maneuver by themselves when they land on Skyports. This is because most eVTOLs are electric and battery-heavy, which makes them very weight restricted.

“What a lot of manufacturers are realising is that it’s advantageous to offload as many functionalities as they can to the ground. One of those is the ability to have motorised landing gear, which would naturally add a lot of weight and complexity to the eVTOL aircraft.

“The company started with the goal to solve that problem in Skyports and conceive a vehicle that would be able to move eVTOL aircraft from the landing pad to the parking spots. So we developed that: a fully autonomous, fully electric vehicle, operating in a very constrained environment which makes it very easy to deploy. Then we realised that the same solution could be expanded into business, general and commercial aviation.

“It’s a very interesting time because the industry landscape has remained stagnant for the past 50 years and there has been very little innovation. With COVID-19, the industry is ripe for disruption. Deploying all these autonomous vehicles would save airlines and airports billions of dollars every year, which makes it very attractive.”

Q: That’s incredible to think your autonomous vehicle platform would save airliners and airports that much money. Are you able to expand on where you think these cost savings could be made, as a result of this project?

JV: “For aviation, there are a few aspects that we’re tackling and solving which can ease the burden on the ground operations for airliners, but this also applies to Urban Air Mobility.

“By eliminating aircraft engine use for ground operations, we’re able to reduce the aircraft’s energy consumption, which in turn increases the range. We also reduce the net acoustic footprint of Skyports and airports. For Skyports, it’s going to be very important because they will be located in very dense urban areas, and public acceptance plays a big role here.

“By automating ground operations, we also reduce delays and congestions, which enables a greater throughput and can potentially ease the workload of ramp operators. It also increases safety through the perfect repeatability of our movements and eases the burden of the load they have to do.

Q: All sounds great. Where are you at with developments now for your autonomous vehicle platform?

JV: “We’re developing our cloud-based traffic management network and our vehicle platform in parallel. We have an amazing team of engineers that come from industry players such as Google, Waymo, Uber, Amazon, Mercedes-Benz and General Motors. We’re on track for a 2023 market launch.”

JV: “As you know, there is somewhat of an uncertainty as to when the Urban Air Mobility market is going to launch. Uber has said 2023, Lilium has said 2025 and a few others have said 2024. So to circumvent that uncertainty, we’re launching in 2023 in business aviation to tow private jets. And if the Urban Air Mobility market launches in that same year, then we’ll be ready to tow vehicles in that sector too.”

Saunon Malekshahi: “The weight class of both private jets and eVTOL aircraft is very similar, so the same vehicle platform can be used interchangeably between Skyports and small private airports.

“The reason why we’re targeting private jets is because their movement requires a more rigorous operation in airports when you compare that to the other general aviation aircraft. Lightweight aircraft like Cessnas can be moved by hand very easily, but private jets require more structured handling.

“After deploying in general aviation and Urban Air Mobility, we will use these experiences as a testbed to deploy in commercial aviation by 2026 or earlier.”

Q: Do you think starting off in business aviation could help lay the foundations for Urban Air Mobility, when it does come to fruition?

JV: “Absolutely. Our initial operating environments will be great learning experiences. A deployment in general aviation, however, will be more comparable to commercial aviation, given the similarities in operational protocol.

“With every vehicle we deploy, we’re able to gather data about aircraft movement, path optimisation, route planning and autonomy stack learning. So definitely, whatever market we deploy vehicles in will be a great test bed for our future plans for growth.”

Q: You mentioned you’re building your new test prototype, do you have an idea of when you will begin testing and how long it would take?

JV: “We’re operating thankfully in very constrained environments, so it’s easy to manage the vehicle’s autonomy because of the limited number of uncertainties. By comparison, semi-autonomous cars on public roads have to watch out for pedestrians crossing the street, traffic lights, stop signs, bicycles and a near-infinite number of edge cases.

“In airports, everything is clearly marked and the operations are so rigorous that deploying an autonomous solution in that environment is much easier and more feasible with today’s technology.

“Regarding our vehicles, we will be continuously building and testing our prototypes throughout the next two years, with a commercially viable product by 2022 that will be ready for deployment in 2023.”

SM: “Regarding Urban Air Mobility, the video on our website explains most of the functionalities of our vehicles and how they will interface with eVTOL aircraft on Skyports. But fundamentally speaking, between Urban Air Mobility and aviation, what we’re trying to prioritise is maximising airfield throughput and flight volume, by minimising aircraft turnaround time and reducing potential accidents of course.

“In a high flight throughput environment, the slightest mishap can cause tremendous congestion and delays. When you’re able to build an autonomous fleet of vehicles that have access to aircraft flight plan data, all of them can work collaboratively to move these assets.

JV: “The software aspect of our vehicles is what distinguishes us from other companies, and it’s precisely this value add that has attracted the interest of airlines and other airfields to using a solution like ours. This includes both the autonomous navigation and the cloud-based fleet management network.

“Since all our vehicles are equipped with high-precision GPS modules, we know their location in real time across an entire airport or Skyport, essentially operating them as a fleet. They’re in constant communication with each other, so our network is able to efficiently dispatch the right number of vehicles to the right aircraft at the right time, optimising routes to reduce congestion and minimise delays.”

Q: How would this fleet management network work from an end user point of view i.e. a technician working at an airport or Skyport?

JV: “We will have a dashboard on an iPad or laptop, where you’re able to see the real-time location of all of our vehicles; their predetermined routes, whether they’re towing an aircraft or not, and how much battery charge they have left.

“There will be a ramp technician overseeing the vehicles to make sure everything is in order, and in the event of a malfunction, those technicians will be able to communicate with the vehicles or manually override them.

“Our vehicles are also capable of autonomously navigating to charge points when they detect they are low on battery charge. This can be to a predetermined charging dock infrastructure or to a battery swap location.”

Q: Anything else you would like to add about Moonware and your goals and objectives in the Urban Air Mobility market?

JV: We’re very excited about this venture and believe there’s great potential to truly reshape the way air operations take place. There is no better time to come in and transform the industry for the better.